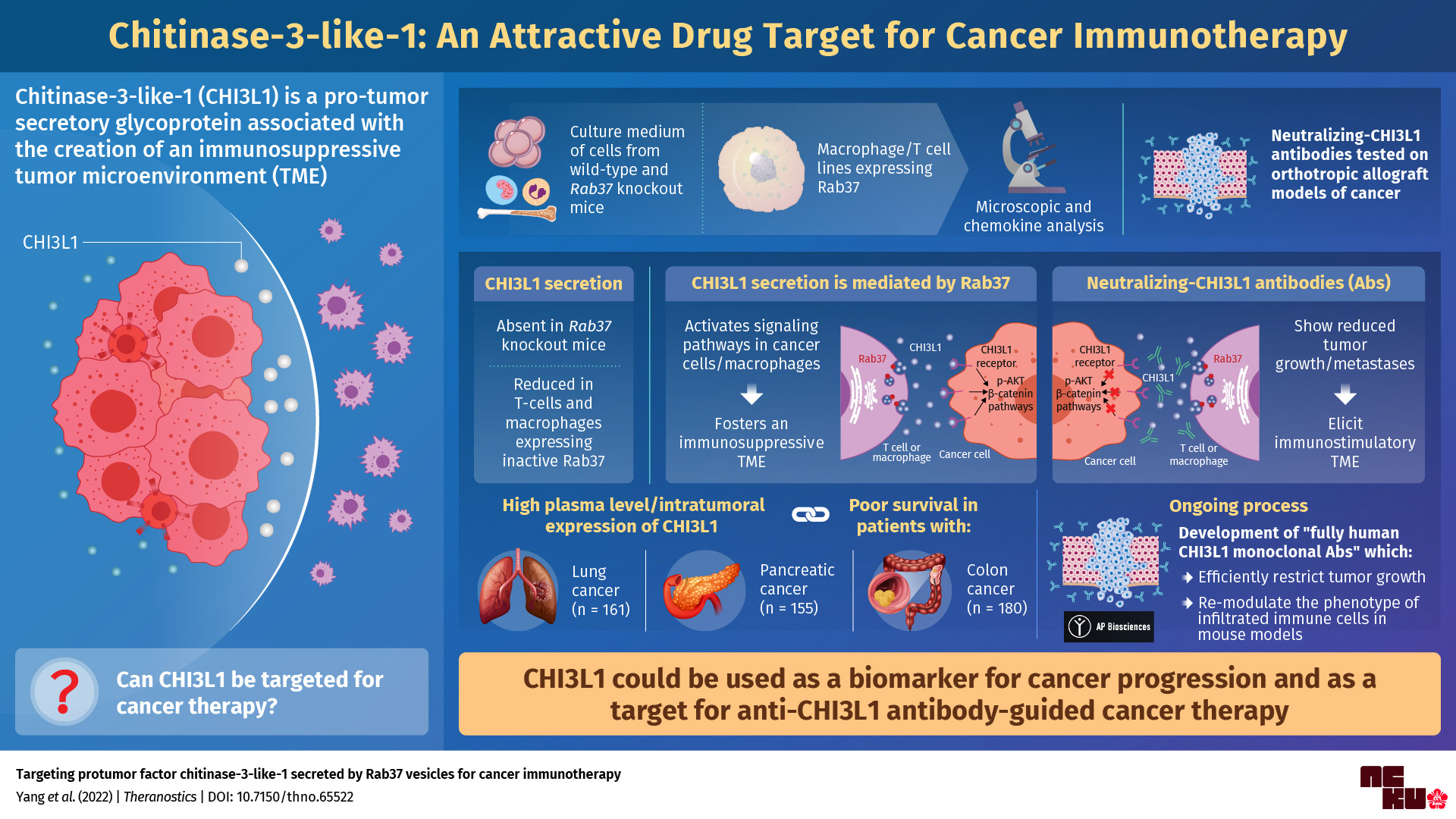 By identifying how the cancer-promoting protein chitinase-3-like-1 is released by cells, a team of researchers has succeeded in creating antibodies to neutralize it and stop cancer growth

The secretory glycoprotein, chitinase-3-like-1 (CHI3L1), is associated with many signaling pathways in the development of cancer. However, the precise mechanism of its transport and regulation has remained elusive so far. Researchers from Taiwan’s National Cheng Kung University have now unearthed how CHI3L1 is secreted by cells, identified a new protein biomarker for cancer progression, and developed CHI3L1-neutralizing antibodies that can arrest the growth of cancers and supplement existing standard chemotherapies.

Lung, colorectal, and pancreatic cancer are three cancers with a poor prognosis. Lung and colorectal cancers are the leading causes of cancer-related deaths worldwide and pancreatic cancer is one of the most aggressive cancers—patients with pancreatic cancer generally do not survive for more than five years post-detection. Common to these three cancers is the non-enzymatic chitinase-3-like-1 (CHI3L1)—a soluble protein containing carbohydrate groups—which demonstrates an increased expression in the plasma or serum and tumors of patients with these cancers, hinting at its role in their progression. This makes it an attractive target for cancer therapy.

Researchers from National Cheng Kung University, Taiwan, have recently been successful in identifying more details on how CHI3L1 promotes tumorigenesis (the development of cancer). The group successfully described CHI3L1’s possible secretory and immunosuppressive mechanisms and developed and validated the efficacy of anti-CHI3L1 antibodies in solid tumors. They have published their findings in Theranostics. This paper was made available online and published in Volume 12 Issue 1 of the journal on January 1, 2022.

The team used a variety of experimental approaches and cutting-edge techniques, such as vesicle isolation, fluorescence microscopy, and immunohistochemistry to come to their conclusions. For instance, the team monitored the real-time movement of the CHI3L1 protein inside cells using light-emitting fluorescent “trackers.” To further validate their findings, the researchers also conducted experiments using laboratory mice.

We spoke to Dr. Yi-Ching Wang, Chair Professor at the National Cheng Kung University, Taiwan, who explained their experiments in more detail. ‘CHI3L1 is typically secreted by a variety of cells, including macrophages, T cells, neutrophils, epithelial cells, smooth muscle cells, fibroblasts, and cancer cells. We found that a protein called Rab37 mediated the transport of CHI3L1 out of these cells via a pathway that was dependent on guanosine triphosphate (GTP) for energy. This was evidenced by the fact that CHI3L1 secretion was attenuated in mice, which were genetically modified to not produce Rab37.’

Once outside the cell, CHI3L1 activated a series of sub-cellular signaling pathways, resulting in the rapid development of pro-tumor microenvironments. This finding led the team to focus its attention on the development of novel antibodies to counter subsequent cancer progression.

As expected, the neutralizing antibodies reduced tumor growth. They also reduced metastases—the spread of cancer from its original location to one or more nearby/distant body organs. Moreover, they triggered a significant “biological reversal” by creating physiological conditions that facilitate the identification and elimination of cancer cells by the immune system. The researchers observed this reversal in lung, pancreatic, and colon tumor models.

Dr. Yan-Shen Shan, senior author and Distinguished Professor, and Dr. Wu-Chou Su, Professor and Director at the Department of Internal Medicine (both from the National Cheng Kung University), educate us about the advantages of their experimental findings, ‘Our CHI3L1-neutralizing antibodies appear to be non-toxic and safe in the short-term. Furthermore, combining them with current chemotherapies used in cancer treatment could lessen adverse effects and shorten patients’ hospital stay.’

After observing the great efficacy of these antibodies, for further clinical application, the team recently developed fully human monoclonal antibodies against CHI3L1 with AP Biosciences, Inc. Two out of eleven candidate clones will be validated with more in vivo examinations to determine which has the best antitumor efficacy and lowest toxicity.

Let us hope that these laboratory experiments pave the way for the successful development of new cancer therapies. Meanwhile, let us also thank the researchers for their groundbreaking contribution to cancer research!

The authors have declared that no competing interest exists.

Dr. Yi-Ching Wang is a Chair Professor at the National Cheng Kung University, Taiwan, where she researches cancer genomics, epigenomics, genome-scanning approaches, anti-cancer drugs, tumorigenesis, and tumor microenvironments. She has published around 150 peer-reviewed articles on lung cancer in prestigious journals and is a recipient of the Taiwan Ministry of Science’s Excellent Research Award.

Dr. Yan-Shen Shan is a Distinguished Professor and Dean at the National Cheng Kung University, Taiwan, where he primarily conducts research on gastrointestinal physiology and clinical oncology, tumor microenvironments of pancreatic and gastric cancers, hepatopancreatic regeneration and fibrosis, as well as surgical infections and nutrition metabolism.