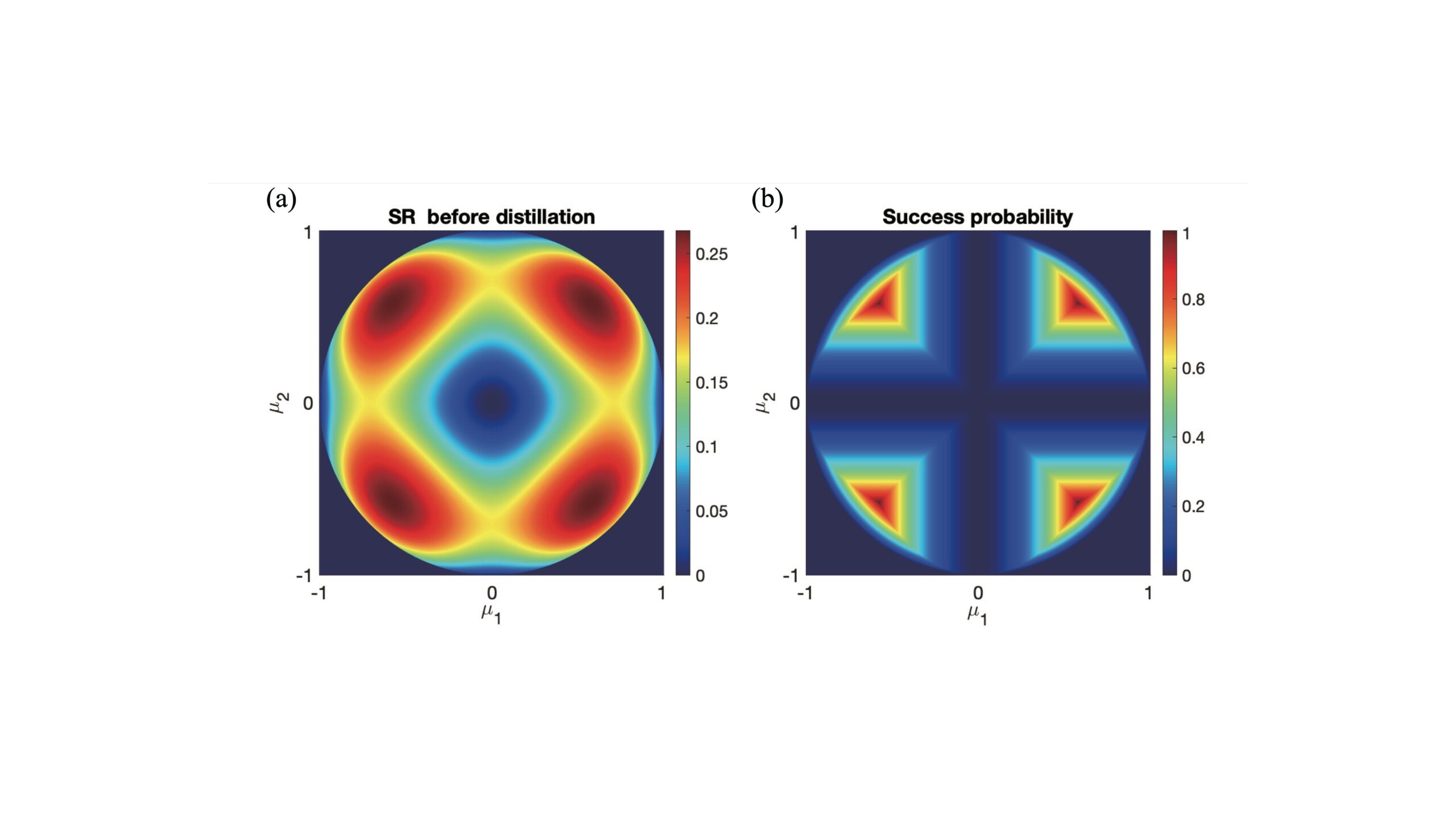 An international team of researchers investigate, in a new study, the complete classification problem of quantum steerability using local filters in relation to the concept of measurement incompatibility. Their findings could enhance the performance of quantum networks.

A central problem in quantum information concerns quantum steering, a quantum correlation intermediate between Bell pairing and quantum entanglement. More specifically, the classification of steerable state assemblages remains an open question. In a new study, an international research team explores this classification problem in relation to the concept of measurement incompatibility, providing a strong quantitative connection between the two ideas. Their findings could enhance the performance of one-sided device-independent quantum information processing.

However, as quantum networks become more complex, they produce significant noise and imperfections, degrading quantum steering and compromising the performance of a task. In order to address this issue, it is necessary to solve an open problem related to quantum steering, namely the classification of steerable state assemblages.

Recently, the “steering distillation problem” has been solved where a strong connection has been shown between steerability and “measurement incompatibility,” a fundamental concept in quantum physics that refers to the impossibility of measuring certain physical variables simultaneously, such as position and momentum. Additionally, recent studies have shown that a state assemblage is unsteerable only if the steering equivalent observables (SEO) are jointly measured. However, a question regarding the transformation of state assemblages into one another through local filters remains unanswered.

Against this backdrop, a group of international researchers led by Prof. Yueh-Nan Chen from National Cheng Kung University (NCKU), Taiwan set out to study the classification problem of quantum steerability using local filters and its connection with measurement incompatibility. “We wanted to study the classification of quantum steerability while trying to understand how to choose the maximal steerability within a class,” says Prof. Chen, explaining the motivation behind their study. Their study was published in Nature Communications on August 25, 2022.

In their investigation, the team focused on three features– distillation, convertibility, and classification, and considered the following scenario: a quantum bipartite state, ⍴AB, is shared by two parties, Alice and Bob. Between them, Bob is the trusted party who only deals with the inputs and outputs and cannot interpret measurements on the state locally. On the other hand, Alice applies all controlled operations on the state and remotely steers Bob’s state. It is then assumed that Alice makes a measurement x on the state and obtains a result a. Bob receives this information thereafter. 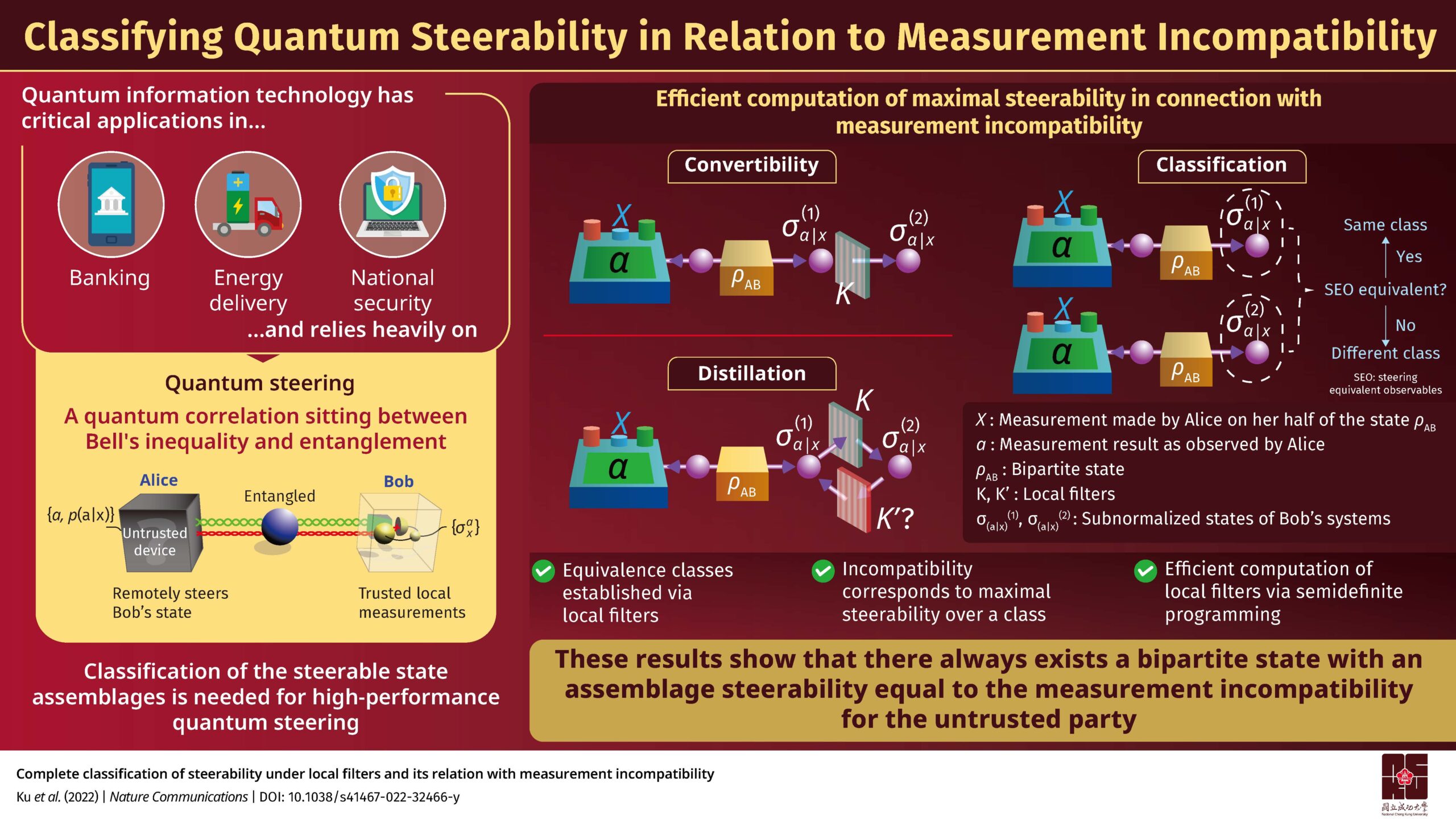 The team aimed to use a local filter K to see how much steerability can be distilled using this filter and explored the classification of two or more assemblages belonging to the same SEO, which were then classified into the same class.

They found that the SEO was responsible for establishing the equivalence classes of state assemblages and related transformations through local filters. Further, the SEO incompatibility corresponded to the optimum steerability over a class. Additionally, they demonstrated the necessary existence of a bipartite state, ⍴AB that offers steerability to an assemblage equal to the incompatibility of the measurements on the untrusted party (Alice). Finally, they looked at the best success rates and probabilities for distillation and dilution in the single-shot scenario.

“Our work can be used to enhance the performance of 1S-DI quantum information processes for applications in quantum key distribution and quantum random generation. Further, it could bridge the connection between Einstein-Podolsky-Rosen steering and the generalized Heisenberg uncertainty principle,” highlights Prof. Chen, discussing the potential long-term applications of the team’s work.

We can expect to see these results being implemented in quantum networks soon.

2Faculty of Physics, University of Vienna

Yueh-Nan Chen received his Ph.D. in Physics from NCKU, Taiwan, in 2001. Currently, he is a Professor and the Director of the Department of Physics and Center for Quantum Frontiers of Research & Technology (QFort) at NCKU. His research interests lie in the fields of quantum information and quantum computing, focusing on quantum optics and quantum transport. He has 108 publications credited to him and 5,151 citations to his name.